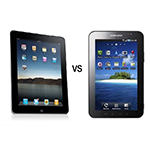 Tablet computers have been around for about twenty years, but it was Apple that pioneered the modern tablet revolution. Now, it seems that the Android might just be turning up the heat a little on iOS.

With the shipment of Apple’s tablet dipping, as smaller devices are catching on with more consumers, devices running Google’s Android are expected to grow their market.

Android tablets are hitting the stores every few weeks – some compete on price, others compete on size, while still others try to look cooler. Google’s Nexus 7 tablet and Amazon’s Kindle, which uses its very own customization of Android, have been making major inroads with consumers.

According to the report from research firm IDC, tablets that run Google’s Android operating system are poised to overtake the iPad. The sudden surge of low-cost Android-based tablets has prompted the International Data Corporation to forecast worldwide tablet shipments. IDC has predicted that the shipment of Apple’s tablet will dip below 50 percent of the market, while devices running Google’s Android will grow their market share to 49 percent from 42 percent.

What works for Android?
The growing variety of smaller and cheaper Android tablets may be the reason for chipping away at Apple’s dominance since the first iPad was launched in 2010. Androids tend to be more upgradeable than iPads, as Apple mostly restricts features to the ones that come in the standard model. Another significant difference, especially for the programmers, is the way the two handle apps. Apple allows apps to be sold only through its online App store, and only the ones which are approved while android devices use a much more open model, where anyone with the ability can release an app and no one needs any approval.

It’s not that iPad and iPhone shipments have stopped growing at enviable rates, but their rivals like Samsung Electronics probably have an edge with their greater variety, effective marketing and rapid technology adoption.

Apple has still not dipped very low, even though Android is gaining market, which may be due to the failure of any other tablet-based mobile platform.  HP’s webOS did not live long and even RIM’s PlayBook failed to give major competition to either iOS or Android based tablets.

Even with Apple launching its sortie into smaller-sized tablets with the iPad mini, it received greater competition from the 7-inch Android tablets.  Though the iPad mini has proved to be a hot seller, Apple has still seen its share in the tablet market diminish, and it has not done much to help the overall tablet sales.

Though Apple still remains the top seller among manufacturers, it may be beginning to lose its lead on tablets. When Apple lost the smart phone market share crown, it did not stop iPhone sales from seeing positive growth.

What this means for you?
As an app developer, this is the right time to invest in building an Android app, if you haven’t done so already. It is way early to write Apple off, and for all we know they will be back with a bang soon with the launch of the iPhone 6, but counting on Android wouldn’t be a bad thing to do.