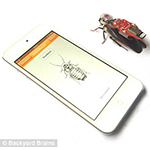 Electronics and smartphones were developed to make things easier for us. Sometimes, these gadgets have also been used to teach students about some basic scientific techniques and methodologies. However, the developers of Roboroach have taken things a tad too far by developing an electronic device to control the organism. The firm has developed a cockroach backpack that allows users to control movements of the insect via a Smartphone.

Talk About Creativity!
Developers of this system claim that this can help children learn more about neuroscience by giving them a remotely controlled cockroach. However, critics claim that the firm has gone too far to educate kids. They also say that attaching the gadget to the cockroach is by itself a form of animal cruelty.

Too Dangerous?
The tiny electronic gadget is attached to the cockroach by performing a minor surgery. In this, the cockroach’s antennae are cut and a hole is made through its thorax using a needle. Finally, electrodes are attached. This will allow users to control the insect’s movements from left to right for a brief period of time with the help of a smartphone application. The cockroach will then have to adapt to the electronic stimulations and has to be given rest for about 20 minutes before making it work again.

The entire kit that includes a cockroach along with a pre-fitted electronic backpack costs about $99. The smartphone application can be downloaded from the App Store. At this price point, it isn’t a big deal for people to buy it. The company that has accused the app development firm of animal cruelty believes that such technology will encourage unhealthy attitude among kids.

Not That Right, Eh?
Experts also say that this technology will make amateurs operate a living organism in an invasive manner. Eventually, people might think of insects and other living organisms as mere tools to get their work done. Furthermore, it is also said that the insect might require more effort to carry the electronic backpack. Supporters of this firm say neurology is awfully taught in schools and such gadgets will allow people to do graduate level research at a tender age.

A Point to Ponder On…
Nonetheless, should an app entrepreneur go so far to teach people about new concepts? The idea behind the concept is undoubtedly a great one but using a living organism and operating on it is unacceptable. Every app development firm out there is looking to make its mark in the cut-throat competition. However, treating a cockroach in an inhumane manner just for the sake of minting money doesn’t seem to be a good thought.

It’s time app developers come out with new innovative ideas that can help users learn without using creatures as a supporting tool. While we love creativity, it shouldn’t come at the expense of in-sensitiveness.