Skip to content
Loading...
Latest news
4 Tech Gadgets You Can Make At Home And Not Spend Money On
Top 10 Javascript Frameworks in 2020
4 Technologies Transformation Third-Party Logistics
4 Ways That Technology Is Predicted To Disrupt The Travel Industry In 2020
15 Tips to Design a Good Website for the Brands to Be Successful
Case Studies

It all started a few years back with the Temple Run app on iOS devices. The app, a simple one where the player plays the role of an explorer, who is running away from evil monkeys after being cursed when picking up an ancient idol in a temple has been the best seller in Free Games across Android and iOS platforms.

Within a few months of its release, the original Temple Run app by Imangi became one of the best selling free games on the iOS platform. Soon after success of Temple Run oz, Imangi partnered with Disney and launched The Temple Run Brave.

Temple Run though, stuck around and due to its increasing demand, Imangi introduced it into the Android Platform as well. While the Android launch of the game were marked with concerns especially that the Android’s lag time witnessed in the Android version was a significant deterrent. It didn’t stop the game though. Its player base continued to rise. The paid app version, The Temple Run brave, didn’t get a good response.

Imangi, now it seems, has realized that freemium models are much better than paid apps especially when it comes to doing business with games like Temple Run. This is why it has now introduced the Temple Run 2, another free version on both iOS and Android platforms.

The Temple Run 2 seems a continuation of Temple Run Brave and a whole world apart from the Temple Run. Within two weeks of being launched, Temple Run 2 has witnessed more than 50 million downloads! Apart from being the fastest downloaded game ever in mobile history, the app was also the first to reach the 6 million download mark within 24 hours after its release on January 17 last month.

If you like Temple Run then you should definitely try pixel gun 3d on pc, you will get the same experience. 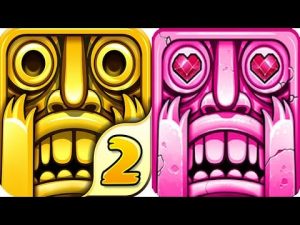 So what have the makers done different?

Well, Temple Run Brave had the player shooting arrows apart from jumping and ducking obstacles. In the Temple Run 2, the players get to do a lot more! The basic premise remains the same. You take an ancient idol and are chased by a demon. But here comes the twist. You get to swing around the ropes, jump over rivers and even ride on tracks!

They seems to have realized that in app purchases can be a better way of generating revenues and making the game more popular. On the Graphics front, the game scores higher too and there is a considerable amount of improvement even from Temple Run Brave. There seems to be no doubt that they got it right this time. There are plenty of in app purchases to choose from and plenty of achievements to be unlocked.

The Temple Run games have created their own niche in any smart phone owner’s mind and it remains to be seen what Imangi comes up with next. Will it be a paid model or a freemium one or will they continue to develop the Temple Run Franchise both ways, as freemium and paid versions?